Definitely not for the faint-hearted. Disturbing imagery and some profanity. You have been warned...

When Doc Powers wakes to find a deadly message left at his country property, he and his friend D.I. Jack Carver are sucked into a nightmare investigation into a precocious teenager - a budding psychopath with violence running through his veins...

Can they stop him achieving his aim of celebrating his 'coming of age' - a spectacular finale involving gasoline and explosives? The lad's mother and grandmother - the victims of his ongoing campaign of psychological torment - are in jeopardy.

Find out the thrilling outcome in Gaslighting - the third 'stand alone' novel in this dark, gritty, British Crime Thriller trilogy. Please note: This psychological suspense story contains spoilers so you are advised to read the award winning first book (Remorseless) to maximize enjoyment, although this is not essential.

'Suspense glueing me to the pages, heart beating faster than normal, empathizing with the characters, fearing for them - I knew there wouldn't be an easy happy ending. Will doesn't spare his flawed heroes... the villain is a psychopath of the worst kind, cruel, selfish, insensitive, frighteningly intelligent, cold and heartless - although he's just a 16-year-old kid... I love that his characters are real and three-dimensional who think, act and speak like real persons.' 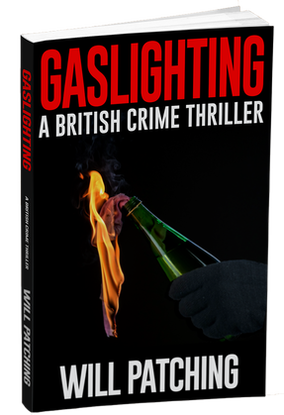 The events in Gaslighting take place several years after the tale begins in Remorseless, and in this final instalment of this thrilling trilogy you will discover most of the answers to the following questions, some posed by fellow readers anxious to know what happens next, some posed by yours truly to help me develop the story.
If you have any other queries please leave a comment on my Facebook page, or if you'd prefer a personal response or your question involves spoilers, then please email me or use the contact page.

As ever, I can't guarantee you will like the answers, but I've done my very best!
Gaslighting
​Definitions
1). Gaslighting (verb)

A form of manipulation and emotional abuse. The perpetrator aims to create doubt in the mind of a targeted individual, or members of a group. Targets begin to question their own memory, perception, and sanity.

Arsonists’ slang for the technique of using a fuel-filled Molotov cocktail, launched from a distance, to ignite a flammable or explosive compound, thereby creating a much larger inferno.
BTW You can find a lot more information on psychopathic criminals - including young killers - at my specialist website: Psychopaths in Fact & Fiction.