Is a vicious psychopath from Doc’s past somehow involved, despite having been incarcerated for two decades?
And most importantly to Doc, where is his lover, Judy Finch, who went missing several months ago..?

Find out in Mutilated - the second 'standalone' novel in this dark, gritty, British Crime Thriller trilogy. You can check out the 5 star reviews on Amazon too...

'Wow! Just finished reading Mutilated. Absolutely fantastic, I couldn't stop reading, the whole thing was gripping and I had to know what happened next...'

'Will Patching is an author whose ability to draw you into the sick world of pure evil psychopaths is seriously unnerving and totally brilliant!'

'Mutilated explores a very dark area of the human mind as well as a fascinating insight into an alternative culture where the reader gets into the minds of what drives the characters as the novel twists and turns and towards a gripping finale. I will certainly be looking out for this author in future, his work is quite simply brilliant...' 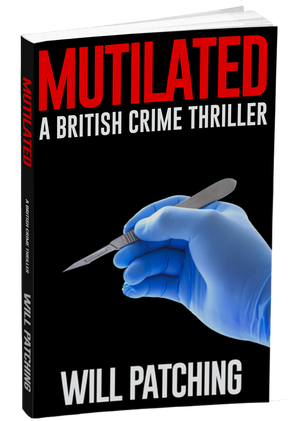 Order online now!
Possible Spoiler Alert!
​
Well, if you have read Remorseless (though that is not essential before reading Mutilated) you should be prepared for a few surprises while I answer some of the questions you may have after observing the demise of the rather menacing Leech boys.

Perhaps you felt the ending was a little too 'happily ever after.'

In Mutilated you will discover most of the answers to the following questions, some posed by fellow readers anxious to know what happens next, some posed by yours truly to help me develop the story:If you have any other queries by all means drop me a note through the new, special Readers Group comments section, comment on my Facebook page, or if you'd prefer a personal response then please email me or use the contact page.

I can't guarantee you will like the answers, but I've done my very best!
Paperback rear cover 'blurb':

A psychological chiller with fascinating characters and an intricate plot containing plenty of twists and turns.

That same morning, DI Jack Carver is appointed lead detective when a dismembered victim is found hanging from a tree on Clapham Common in south London.

Neither Doc nor Jack believe in coincidences…

What has this psychopath, nicknamed ‘The Surgeon’ by Jack’s team, got to do with Doc’s past, and how can one of Broadmoor’s most vicious patients be involved - despite being locked up for over twenty years?

And more importantly to Doc, where is his lover, Judy Finch, who went missing several months before?

The dark, spine-chilling first book in this trilogy, Remorseless, has been described by independent 5 star reviewers as 'British crime writing at its best', 'Right up there with James Patterson and Stephen King', and '...up there with Stuart MacBride and Val McDermid'.
For another hint at what's in this thrilling novel you might like to read this!
You can also find a lot more information on psychopathic criminals at my specialist website: Psychopaths in Fact & Fiction.